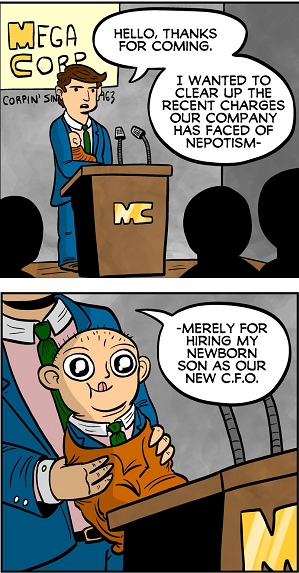 A trope often found in situation comedy, it's where the boss (often a somewhat unpleasant one) places a relative or in-law in a position of power. Invariably, the relative will be incompetent or worse. A variation on this trope might be to actually have the relative be the protagonist, and have to earn the respect of his or her subordinates before they can actually accomplish anything meaningful. The trope can also be subverted if the relative is actually competent, in which case the grumbling can quickly subside. It can be averted in cases where nepotism is expected, such as a prince becoming king when his father dies, in which case most people just accept it as the way things are supposed to go.

Very much Truth in Television, and sometimes a way for the relative to get their feet wet in the business, especially if they're being groomed to take over the business when the current owner retires or is otherwise unable to make decisions. Naturally, given how controversial (and rather common) this practice is, please refrain from adding any real-life examples here.

A sub-trope of Screw the Rules, I Have Connections!. Compare Sleeping Their Way to the Top and Royal Favorite. Can be one of the ways for someone to end up in the Wrong Line of Work, if they're incompetent in the field their relative puts them in. The opposite of this trope is Coattail-Riding Relative. When this occurs among RPG players (romantically connected to the GM or otherwise), see Dungeonmaster's Girlfriend. In general, Nepotism may be an expected payback if someone who was Vicariously Ambitious helped get somebody else into a position of power. When an authority figure deliberately tries to avoid this, they're engaging in Anti-Nepotism.

Not to be confused with the trope Nephewism, although the word "nepotism" comes from the Latin word "nepos" which means "nephew" (the term originated from the tendency of Medieval and Renaissance-era churchmen to appoint their "nephews" — who were often their unacknowledged bastard sons — to comfortable sinecures). Also not to be confused with Neopetism.

Fun fact: This trope, when applied to friends instead of relatives, is known as cronyism — after all, "It's not what you know, it's who you know." See also The Power of Friendship…

when Gyro finds out Johnny didn't vote for him for Class President.