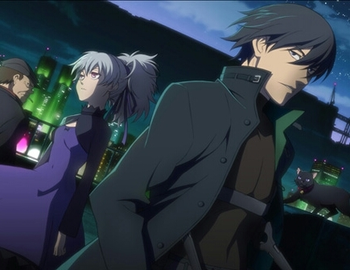 Huang, Yin, Hei, Mao. Yes, the cat is a main character.
"A night sky full of cries
Hearts filled with lies
The contract—is it worth the price?
A soul pledged to the darkness
Now I've lost it, I know I can kill
The truth exists beyond the Gate!"
— abingdon boys school, "Howling"note the first OP
Advertisement:

There's a manga, Darker Than Black: Shikkoku no Hana (Jet Black Flower) by series director Tensai Okamura with art by character designer Yuji Iwahara, which covers the events that take place in Tokyo after the first season, but before the OVAs.