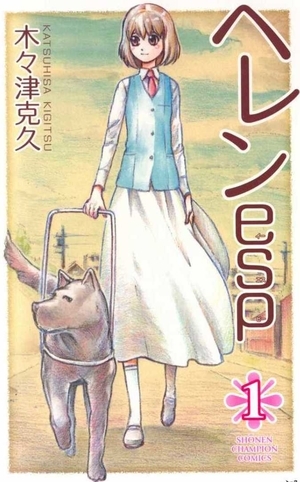 A manga written and drawn by Kigitsu Katsuhisa, the same mangaka responsible for Franken Fran.

It tells the story of Helen Takahara La Guido, a young Japanese girl who, five years ago, lost her sight, hearing, and ability to speak in a traffic accident. Until the beginning of the story, Helen was having a peaceful and normal life with her uncle and her guide dog Victor, when suddenly strange powers woke on her.

While the range of those powers is unclear, the series shows Helen helping several people in extremely unusual ways with them, as well as sensing and meeting beings that are unseen to normal people. Beside all this, she also can communicate with Victor via telepathy. With her innocent and optimistic nature, Helen is able to solve problems that couldn't be done by a regular human, albeit some of them get herself trouble.

Serialized in Weekly Shonen Champion from 2008 to 2010 and compiled into two volumes, the series is a big surprise to the readers who know Katsuhisa's other work. While Franken Fran presents us with shockingly violent scenes, very disturbing situations and (usually) not so happy endings, Helen ESP surprises in showing a more positive and light-hearted story. However, one thing that both series have in common is that the protagonists see themselves entangled in problematic situations of the human nature, and try to solve them no matter what cost.