Manga / How to Make an Invisible Man 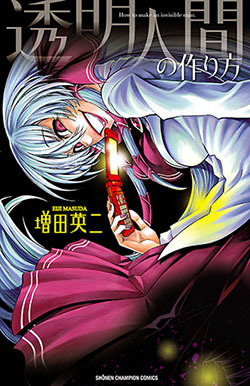 Let's be happy together. In a world that will belong only to us.
"I want to go somewhere far away." "This isn't how it should have been." "This isn't where I belong." "I'm bored." "I want to be free." May I tell you a way to be able to go wherever you want? It's simple. You just have to become invisible…
—Miki
Advertisement:

Saitou Shinji is an Ordinary High-School Student living a peaceful life on a peaceful island… way too peaceful for his tastes. The only two things he enjoys on the island are the pranks he plays and the time spent with his Childhood Friend Kana, a cheerful girl who loves taking photos and understands Shinji better than anyone.

However, when he runs away after an incident where he got angry and punched several classmates in the face, he receives a mysterious e-mail on his cellphone: "If you answer this e-mail, you too can become an invisible man!" He answers it while laughing it off… but the day after, everyone has inexplicably forgotten about the incident, and a mysterious white-haired girl appears before Shinji, calling herself an "invisible woman". He soon realizes that answering this e-mail may take away from him the only thing he holds dear…

Toumei Ningen no Tsukurikata (How to Make an Invisible Man) is the very first series of Masuda Eijinote Not counting the three-chapter series "Shirou Rabbit", published in 2007, which is very obscure and nigh-unfindable, first published in the Shounen Champion in 2010. At the time it went relatively unnoticed, but with the success of Masuda's later work My Monster Secret, the eight chapters of the series were finally compiled in a tankoubon in 2014, allowing the readers to rediscover it.