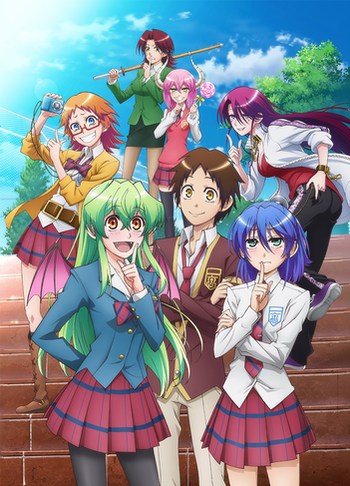 Asahi Kuromine is your average high-schooler... besides having a really bad poker face. He currently has a crush on a fellow classmate named Youko Shiragami, the resident stoic Ice Queen. When he tries to confess to her, he ends up discovering that she is a vampire... and that she will have to leave school if she's ever found out. He subsequently swears to keep this secret to allow her to continue with her school life. And asks her to become... "friends" with him.

However, being the "Man Who Cannot Lie", he may have bitten off more than he can chew, as Shiragami herself turns out to be quite the cheerful ditz. He also has to contend with his malicious childhood friend-reporter Mikan Akemi who never lets any secret stay hidden, and Shiragami herself may not be the only supernatural being roaming around on the school grounds.

Jitsu wa Watashi wa (literally "Actually, I...", but subtitled "I am...") is a romantic comedy and Eiji Masuda's third series, featuring a cast of lovable weirdos, supernatural or otherwise. It has a fun take on an overused premise, notably by mocking or exaggerating a few romcom and school-life clichés and playing with character archetypes, and has good use of hilarious facial expressions. It is also fond of parodying some horror, sci-fi and action shonen tropes. While the first 10 volumes mostly focus on the four main characters (Asahi, Youko, Mikan and the alien Nagisa) and their love square, later volumes explore the rest of the cast and the other aspects of the story more deeply, with the fantasy and sci-fi elements becoming increasingly more prominent. The manga was serialized in Weekly Shonen Champion from January 13, 2013 to February 16, 2017, with 196 chapters compiled into 22 volumes.

An 13 episode animated adaptation by TMS Entertainment aired on TV Tokyo during the Summer 2015 Anime season, and can be watched on Crunchyroll under the title Actually, I am

. While it more or less follows the early chapters of the story, it also takes some notable liberties, notably in the order of events, and uses a far more conventional artstyle.

The manga has also been licensed by Seven Seas Entertainment under the title "My Monster Secret". The first volume came out in the United States in January 2016.

For a different series with a "boy keeps a vampire girl's secret" premise, you can see Karin (which Masuda may have taken some inspiration from).