A list of characters appearing in My Monster Secret. Beware of unmarked spoilers! 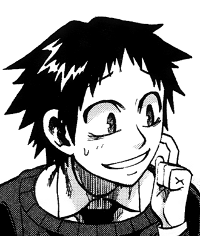 The series' protagonist, an earnest but clumsy Ordinary High-School Student. Nicknamed "Anazaru" (literally the "leaky sieve"), this man cannot lie to save his life. So of course, he finds himself having to keep the secrets of a whole bunch of people throughout the story. He has a crush on Youko. 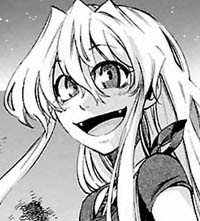 A cool, aloof beauty... at least, that's the impression Asahi initially has of her. Turns out she's a cheerful and not particularly bright vampire girl, who inadvertently lets Asahi see her bat wings one day. She has promised her father that she would leave school should her secret be revealed, so Asahi promises her that he won't reveal her secret no matter what. 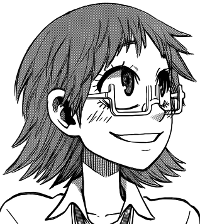 Asahi's childhood friend, Mikan is a feared scoop-hunter who will not let any secret unrevealed, and also happens to have a crush on her favorite victim. She has two little brothers that she often takes care of alone, and can be a bit of a miser, as her house not very wealthy. 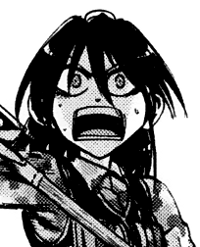 The hyper-strict, hyper-competent and hyper-dutiful class representative. Asahi used to have a crush on her but he was so obvious she rejected him before he even confessed. Oh, and she's also a 16cm tall alien on a mission to observe humans. 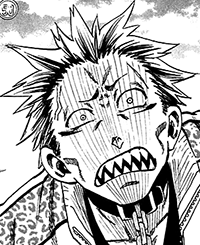 A wolf-man who is sent by Youko's father to see if she is keeping her secret at school. He also happens to have a crush on her. 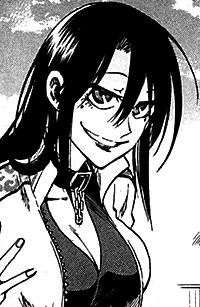 The main personality of their body. Unlike Shirou, not only does she look like a normal human, she is a shameless pervert and even presents herself as one.

The three of them 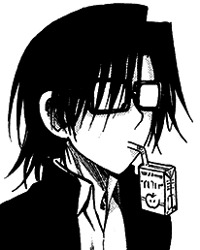 Asahi's friend since middle-school, he's a serious and level-headed guy who seems to observe the events around him without caring much. He's a comically chill guy overall. 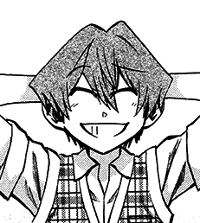 A pervert and a loser, prone to laugh at Asahi's misfortunes whenever he has the chance. Much more than at his own, at least. He has a penchant for falling in love for petty reasons, and his perverted zeal has made him the target of multiple arrests by the police. 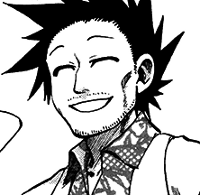 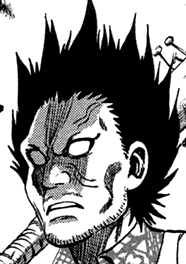 The "big brother" of the group, who talks like a girl for some reason. He's a kind and compasionate guy... as long as you don't get on his bad side. A former delinquent, he changed his ways when he entered high school. 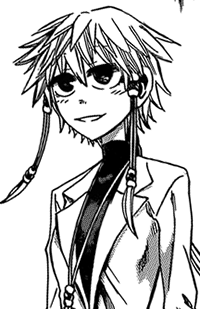 Asahi's granddaughter from fifty years in the future. She is on a mission to prevent the Charismatic Pervert II from taking over the world. A very affectionate, clingy, and unintelligent girl, she usually rides on the shoulders of her friends, mainly Asahi. 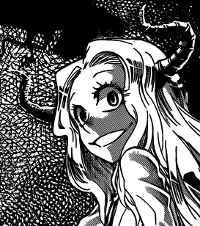 A demon hired by Genjirou to bring Youko back home after Shirou apparently forgot about his mission... or so she claims. She's actually a (self-proclaimed) fallen angel, and the student council president of the school. Despite being technically a student, she is more often seen helping out Akane in her Principal tasks. A profoundly sweet girl, Karen has been the Student Council President for decades on end.

Three classmates of Asahi and Youko, who befriend the latter after seeing she has opened up. 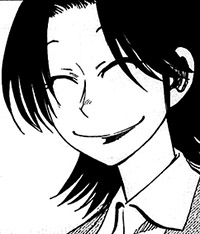 The homeroom and English teacher of Asahi and co's class, she actually knows about all their secrets, but is more busy dealing with her devilish ancestor Akane. Though and excellent and doting teacher, she is very volatile, and resents the fact that she has never had a boyfriend. 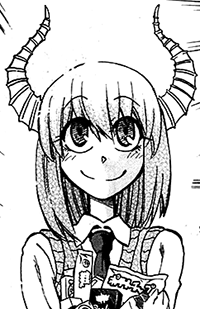 The principal of the school, she's your ordinary super-powered ancient devil, with a love for snacks and magic pranks. She also happens to be Akari's immortal great-great-grandmother. 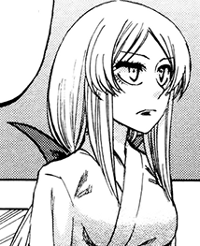 A beautiful woman hired as an assistant homeroom teacher in Asahi's class, when the new year starts. 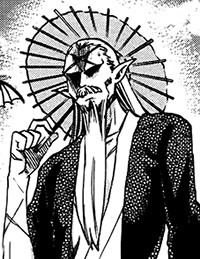 In his high-school days 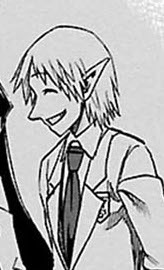 Youko's 4-meter tall vampire of a father. A bit scary on the outside, he's a very (excessively...) caring dad to Youko. Though extremely intimidating, he is very clumsy. 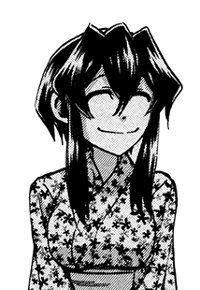 In her high-school days

Youko's mother, much more relaxed than her husband, who has kept a mischievous personality. More often than not, she's the carer for her husband's antics, and alongside Akari, one of the few people that keeps Akane in check too. 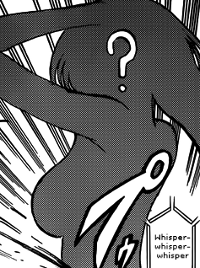 Shiho's human mother, she's a legendary woman known as the queen of perverts, who has made the noses of countless men bleed. 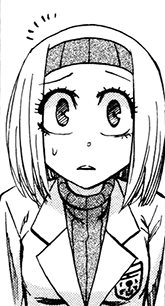 Asahi's little sister, who like her brother finds herself surrounded by weirdos in her class. Mainly known for her sharp tongue. 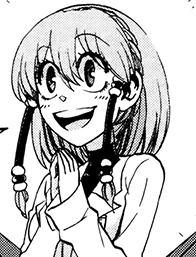 A rather loony and sentimental girl who falls in Love at First Sight with… pretty much every older boy she comes across. She has a subtle, very well hidden secret.
Sen 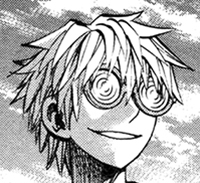 The boy of the group, he usually makes vaguely perverted comments while always having the same deadpan expression. 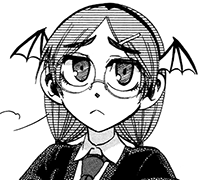 The class representative of Mei and Yuka's class, she's a succubus who happens to completely lack any sex-appeal. She nonetheless wants to restore the honor of her race, which fell into disgrace after the sudden rise of the Charismatic Pervert. 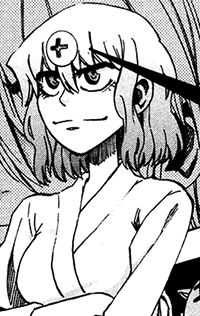 Nagisa's brother, who came to Earth to check on her. In a female body. He's a rather lazy, hypocritical miser, and prone to take advantage of others (or at least try) if it can get him out of his Perpetual Poverty. Due to his laziness, he is unwittingly responsible for his sister's personality.

The Gods of Fortune

Talking spirits that inhabit glasses for some reason. The one inhabiting Mikan's glasses - a gift from Asahi that she cherishes - is called Fuku-chan. The others are Fukunosuke, the Administrator of Fortune, Fukutarou, the Encyclopedia of Fortune, and Fukuzou, the Great Professor of Fortune. They usually use pigeons as transportation and they're absolutely terrible at their jobs. 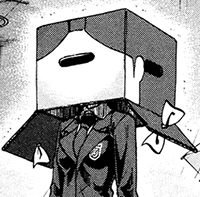 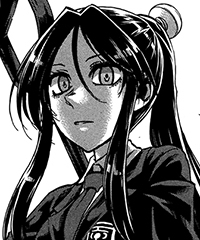 A mysterious girl who first appears before Mikan to make an ominous prediction. She's actually Nagisa Aizawa from 10 years in the future. 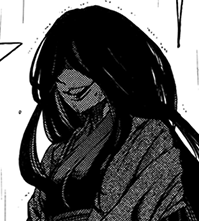 The enigmatic former principal of Morobare High, and apparently Akane's enemy. She's the first "antagonist" of the series who mostly has her head on straight. 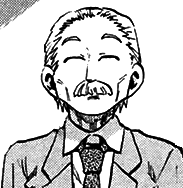 A former pupil of Akane, who occasionally assists her in her antics. A passive, older mustachioed man. 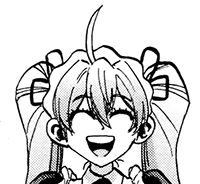 Akari's elder colleague in the maid café she works in. A cutesy and bubbly girl, she helps her walk down the path of cuteness.