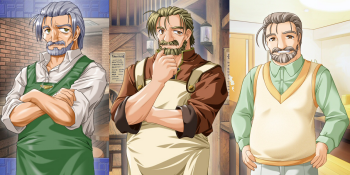 Sometimes, comic artists are famous (or, more likely, infamous) for having very little differentiation among their characters.

Excellent artists, though, can create a vast array of physiques and faces for characters, thus making them easily distinguishable from each other; these artists are masters of character design, or so it seems...

It's only until you get to the artist's collected works that you realize that he is halfway cheating — using some of the same characters over and over again, in different works, as though they were "actors" playing "roles."

This doesn't always detract from an artist's work, however, as this is often done purposefully when one character in a story plays a similar role as they did in an earlier one; in fact, knowing that this is the artist's style can greatly help the audience identify The Hero, The Big Bad, and everyone in-between by their "actor." It also offers the potential to have an "actor" Play Against Type.

Such troupes are what are known as "Star Systems": a collection of Animated Actors who play different "roles" in different "productions," just as Real Life actors would. In fact, this used to be the way it worked in Hollywood; actors would be signed to a studio, not a production, and would appear in production after production with the studio's other stars. Taken far enough, this might be a Virtual Celebrity.

Note that this trope falls much more towards the Cast of Snowflakes end of the character design spectrum, trying to shy away from Only Six Faces. While a body of works of a particular artist may have reused designs over the course of several works, each individual work tends to be a Cast of Snowflakes; conversely, multiple works of an artist featuring characters who all look alike simply reinforces the notion of Only Six Faces.

Compare Universal-Adaptor Cast, which is much more explicit that these are the same characters in a different setting.