Webcomic / This Is the Worst Idea You've Ever Had! 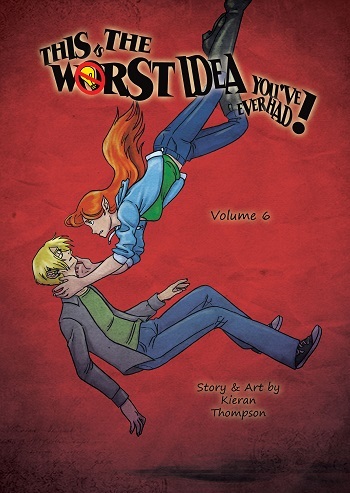 This Is the Worst Idea You've Ever Had!

(Worst Idea or TWIYEH, for short) is a webcomic by Kieran Thompson, a.k.a. Kytri. It follows Nicole Masterman, an elf and recent college graduate, who lives in a fictional town in Virginia with her close friend, Ian, and a small dog named Nummy Muffin Coocolbutter.
Advertisement:

TWIYEH borrows its characters and some of its concepts from Kytri's first webcomic, The Rift, an Orphaned Series about a gang of bounty hunters. The Rift was ended in February 2010 due to lack of interest, but TWIYEH was started a few months later in May 2010.

While the characters from The Rift are the main players in the comic, several characters from Kytri's Team Fortress 2 fancomic, Cuanta Vida, have been appearing as major and minor characters, earning TWIYEH a sizable fanbase.

More information, as well as character bios, can be found here

This Is the Worst Idea You've Ever Had! provides examples of:

Sin Pararse is a prequel comic about the relationship of Gabry and Liam. It is set in the TWIYEH Universe and has a darker overall tone than either Cuanta Vida or TWIYEH.