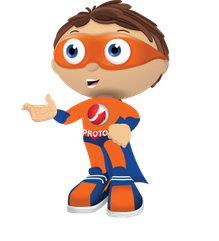 He looks awfully familiar...
Protegent is the name of an antivirus software originating from India. The software itself isn't too well-known outside of India, but Unistal, the company who created Protegent, released several animated ads for it online that notably gained a following outside of the country.
Advertisement:

These ads for Protegent feature the antivirus's mascot, Proto, who is quite literally just Whyatt/Super Why but recolored. The ads that were made include a few where Proto suggests Protegent to an adult struggling with some computer-based problem, a few where Proto raps about the benefits of Protegent (which have also been put together as one ad), and one where Proto mentions Protegent's data recovery software to... another Proto, apparently, after the latter's computer crashes.

"I am Proto! Ruining your life with tropes is my motto!":

Example of:
So Bad, It's Good