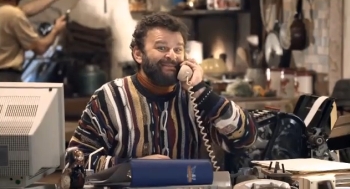 "You have problem?"
Peggy: "Thank you for calling USA Prime Credit, my name Peggy."

Peggy is a customer service representative for USA Prime Credit, a spoof credit card company seen in series of advertisements

for Discover Card. Peggy lives in Siberia, speaks with a Romanian accent and is a somewhat Affectionate Parody of people who work in call centers in countries such as India. Peggy's goal seems to be to provide you the least helpful customer service possible, by not answering your questions, giving you the run-around and refusing to deal with you directly. Further ramping up the parody, Peggy (as you can see in the page image) is a man.

Peggy is played by Tudor Petrut

, an actor and writer who also works as a high school algebra teacher.

, but it was always broken. As of at least May, 2014, it seems to be really broken, though you can still find it at the Internet Archive

As of October, 2012, no new Peggy ads have been seen in over a year and it is assumed that the campaign is retired.

Peggy and his commercials give examples of: