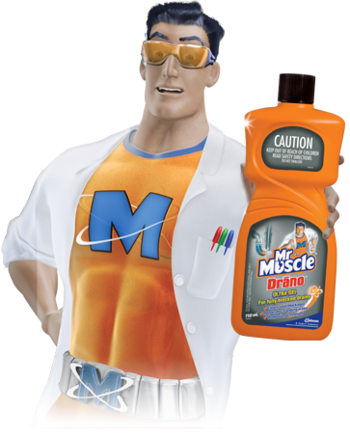 Cleans your kitchen in a single bound!
"Ah, [Cyborg Cider-Man] is a soda superhero. Sometimes, it's easy to spot sleazy advertising."
— Saiki, The Disastrous Life of Saiki K.
Advertisement:

A variety of commercial where the product, a Mascot or the product as a Mascot is presented as a superhero, fighting against or protecting you from something. Sometimes, they are explicitly fighting Peeve Goblins that metaphorically represent a real-life nuisance.

Expect to see the product in question flying around with a cape billowing behind it, and a classic tights and underwear on the outside combo. In the case of dental hygiene products, you will likely see microscopic toothpaste superheroes fighting gingivitis inside a person's mouth. Of course, the question arises as to what happens to these miniature people when you spit the toothpaste out.