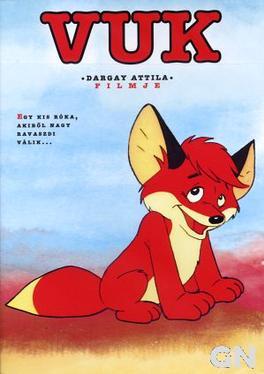 Vuk (a.k.a. The Little Fox) is a Hungarian animated film from 1981, produced by Pannonia Film Studio. It is based on a novel by Hungarian author István Fekete. The novel was also translated into German, but never in English. However, the Animated Adaptation was released with English dub. The film was originally released as a four-episode Mini Series on the Hungarian national television in 1981, but then got a cinematic release the same year. The (edited) English dub has been screened in the United States on Nickelodeon.
Advertisement:

The story is about a young fox, whose family was killed by a human hunter, and is raised by his uncle. He learns to hunt, learns the necessary skills to survive in the forest, and gets revenge on the hunter who killed his family.

Vuk, along with Cat City, is often considered one of the most beloved classics of Hungarian animation.

In 2008 an All-CGI Cartoon sequel called Kis Vuk (released in English as A Fox's Tale) was created based on a novel written by István Fekete's son, in which none of the creators of the original cartoon were involved. The sequel is one of the most hated animated films in Hungary; see the YMMV page for more details.