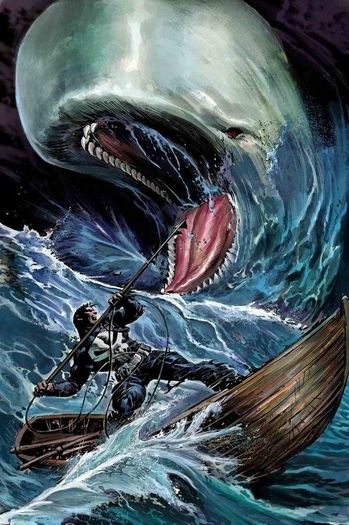 One must stand strong, even in the face of an over-whale-ming adversity.
Lisa: Dad, you can't take revenge on an animal. That was the whole point of Moby-Dick.
Homer: Lisa, the point of Moby-Dick is to be yourself.
— The Simpsons
Advertisement:

A situation in which the Hunter Archetype fixates on an animal as his Arch-Enemy as a result of twisted logic, almost always a direct result of a past personal grudge. Be it an animal that constantly thwarts his efforts or just some plain old mindless beast that made off with one of the human's limbs, the human dedicates all of his time and effort toward the capture or killing of the beast, even if it kills him.

A human Super-Persistent Predator — in some cases, the Hunter is justified in hunting the animal because It Can Think. In others, the Hunter himself illustrates that Humans Are the Real Monsters or Humans Are Cthulhu. See He Who Fights Monsters.

Please note that animals with clearly human intelligence, behavior, and ability to communicate with humans do not qualify. Someone must be seeking revenge against an animal that acts like an animal.

Frequently, media that employ this trope will reference the Trope Codifier, Herman Melville's Moby-Dick, though it would be an oversimplification to say that this trope is the whole point of the book. It is one of many points.

Compare Enmity with an Object.

Alternative Title(s): The Ahab, Captain Ahab Syndrome, Pick On Someone Your Own Species