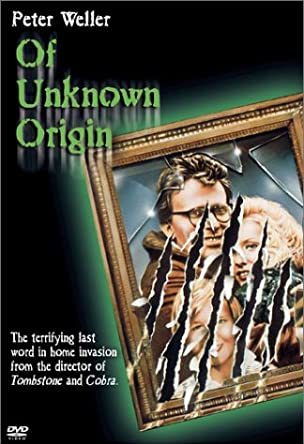 Of Unknown Origin is a horror/thriller film from 1983. It was directed by George P. Cosmatosnote (Who also did Rambo: First Blood Part II, Cobra and Leviathan (1989)) and stars Peter Weller, Jennifer Dale and Shannon Tweed. It is based on the novel The Visitor by Chauncey G. Parker III.

When Bart Hughes' wife and son leave their house for two weeks, he thinks it will be the perfect time for him to focus on a project that'll be sure get him a promotion at work. He's in for a nasty surprise, as a huge rat scuttles into his domain and wants to make the place its own.

These tropes are of known origin: