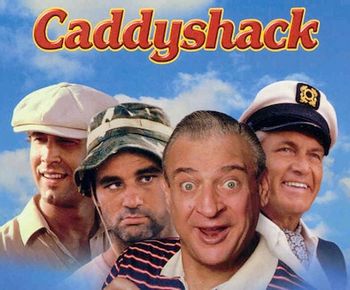 "Hey, everybody! We're all gonna get laid!"
— Al Czervik
Advertisement:

A 1980 comedy film directed by Harold Ramis, starring Chevy Chase, Rodney Dangerfield, and Ted Knight. Bill Murray also had a small part in it, but his improvised stuff was so great he became one of the stars.

Danny Noonan (Michael O'Keefe) is a young caddy at Bushwood Country Club who has no idea about where his future will lead. His best chance at getting his life on track is to earn a caddy scholarship from Judge Elihu Smails (Knight), the owner of Bushwood. Al Czervik (Dangerfield) is a rude and eccentric millionaire who has an interest in purchasing Bushwood. Judge Smails discovers an instant dislike towards Al and soon there is conflict between the Judge and Al, the Judge and Danny, and the Judge and Ty Webb (Chase), the charming golfer who is helping Danny figure out his real goals. Meanwhile, Carl Spackler (Murray), Bushwood's Assistant Groundskeeper, battles a rampaging gopher who is chewing holes throughout the course.

A sequel, Caddyshack II, was released in 1988, directed by Allan Arkush and starring Jackie Mason, Robert Stack, Dyan Cannon, and Dan Aykroyd, with Chevy Chase the only major carryover from the original cast. Being incredibly similar to the original, right down to its characters and gags, it regularly shows up on critics' compilations of the worst movies ever made.