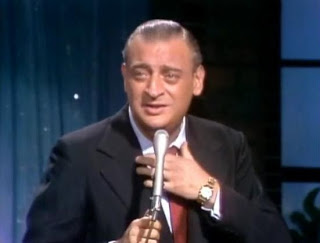 "I mean it's not easy bein' me!
"I tell ya, when I was a kid I had it rough. Once on my birthday, my old man gave me a bat. The first day I played with it, it flew away."
Advertisement:

Rodney Dangerfield (born Jacob Rodney Cohen; November 22, 1921 – October 5, 2004) was an American stand-up comedian and actor, known for his catchphrase “I don’t get no respect!” and his monologues on that theme.

Dangerfield was born in Babylon, New York to Hungarian-Jewish parents. In the early 1940s, he began performing standup under the name of “Jack Roy.” However, he wasn’t very successful and he ended up quitting. He later joked about this by saying “At the time I quit, I was the only one who knew I quit!"

Then, in 1967, when The Ed Sullivan Show needed a last minute replacement for another act, Jacob (now known at this point as Rodney Dangerfield) was the surprise hit.

Dangerfield’s career peak was in the 1970s and '80s. During this time, he made numerous appearances on The Tonight Show with Johnny Carson and The Dean Martin Show, and starred in several successful films such as Caddyshack, Easy Money and Back to School. He also released a few successful comedy albums, such as “I Don’t Get No Respect”, “Rappin’ Rodney”, and “No Respect” the latter which won a Grammy Award. In 1969, he built a nightclub in New York City, which would be the venue for several HBO specials, and was a showcase for talents like Jim Carrey, Jerry Seinfeld, Andrew "Dice" Clay, and Sam Kinison.

Dangerfield continued to perform both on stage and in movies through the 1990s and the early 2000s. He died on October 5, 2004 from complications of heart valve replacement surgery he had undergone the previous August, he was 82 years old. Behind him, Dangerfield left quite a legacy.

In 2004, Dangerfield finally got some respect when he was ranked seventh on Comedy Central’s list of the 100 Greatest Standup Comedians.

Rodney Dangerfield gets respect in these tropes: