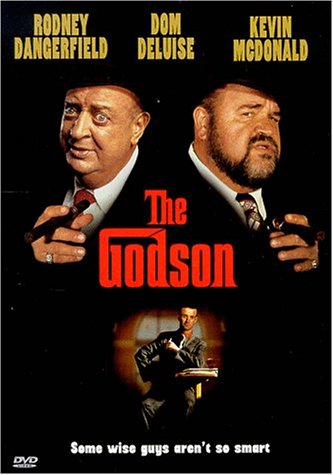 It's so funny, it's a crime!
"Some wise guys aren't so smart."
— Tagline
Advertisement:

This 1998 Direct to Video comedy shows what happens when Bob Hoge directs a gangster movie in a manner akin to the Zucker brothers.

The film begins as Sunny Calzone (Hoge), the #1 son in a mafia family, has a passionate love scene interrupted by a bunch of assassins. After being shot repeatedly, run over, attacked by a raptor, and nearly blown up by a car bomb, Sunny ends up tripping over his shoelaces and knocking his head against a fire hydrant.

Cut ahead to Sunny's funeral, where we are introduced to the film's protagonist: Giuseppe "The Guppy" Calzone (Kevin McDonald), the family's #3 son. As his oldest brother is now dead, and the #2 son has been banished for committing an unthinkable act, it is his job to take up his ailing father's (Dom De Luise) position and lead the Calzone crime family into a new era. Along the way, he must deal with problems such as bankruptcy, the CIA, and a rival mafia family headed by the Rodfather (Rodney Dangerfield) that wants to bring the Calzones to their knees.

Not to be confused with the french crime picture Le Samouraï, which was re-titled "The Godson" in some American markets''.