Finger in the Mail 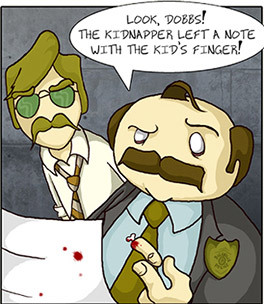 In the event of a kidnapping or Hostage Situation where characters are held for ransom, when the kidnapper is ready to make his demands known and/or make sure he is taken seriously by his hostage's loved ones or law enforcement authorities, the kidnapper will send severed extremities from his hostage to the family/police. Fingers are very common, but ears, teeth, toes, hair, etc. are frequently fair game, as well.

In other circumstances, the situation can involve a Serial Killer mailing more gruesome body parts (typically internal organs or severed heads) from recent victims to either taunt the police/detectives tailing him and prove to them that they are receiving correspondence from the suspect they are after or to convey the gruesome fate to a loved one of the victim.

Compare: Demanding Their Head and Bringing Back Proof when a character specifically demands a body part be brought to them for a bounty.