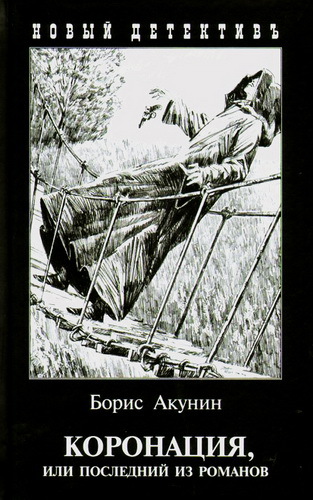 The Coronation (Коронация, или Последний из романов, "Coronation, or the Last of the Romanovs") is a 2000 Russian novel by Boris Akunin. It is the seventh novel in the Erast Fandorin series of detective novels.

It is 1896 in Moscow, five years after Fandorin quit government service at the end of The State Counsellor. Nicholas II of Russia and his family have arrived in the city along with their family, including Nicholas's uncle Grand Duke George Alexandrovich, for Nicholas's coronation ceremony. One fine spring day shortly before the coronation, George's daughter Xenia and 4-year-old son Mikhail are taking a stroll in the park with Mikhail's French governess, Mlle. Emilie Declique. Suddenly kidnappers leap out of a carriage and attempt to snatch the princess. The kidnappers are chased away by two passers-by...Erast Petrovich Fandorin and his Japanese manservant Masa. But the group soon realizes that Mikhail has disappeared.

The Romanov family receives a note from one Dr. Lind, international criminal mastermind, demanding the priceless Orlov Diamond as ransom for the return of the boy. The Orlov, however, is necessary for the upcoming coronation. Fandorin, who has been chasing after Dr. Lind ever since their first encounter in America (mentioned in later Fandorin novel Jade Rosary Beads) is hired by the Romanovs to catch Lind and save young Mikhail.

, a Real Life disaster in which nearly 1400 people were trampled to death at a Romanov celebratory banquet, is a prominent plot point.