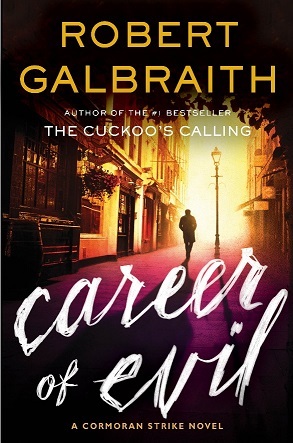 Career of Evil is the third crime novel in the Cormoran Strike series by Robert Galbraith.
Advertisement:

When Robin Ellacott receives a strange parcel containing a woman's severed leg, it's time for her boss, private detective Cormoran Strike, to investigate. As there are are several persons from his past capable of such an act, Strike and Robin must race against the clock to find out the truth before somebody else dies. They eventually discover that a Serial Killer is stalking the area. Meanwhile, Robin's wedding to Matthew approaches, even as she grows less sure about Matthew, and even as she struggles to suppress her feelings for Cormoran.

, with the first chapter

Adapted into the third season of the BBC drama series Strike — and yes, it does use the Blue Öyster Cult song to kick off the show.