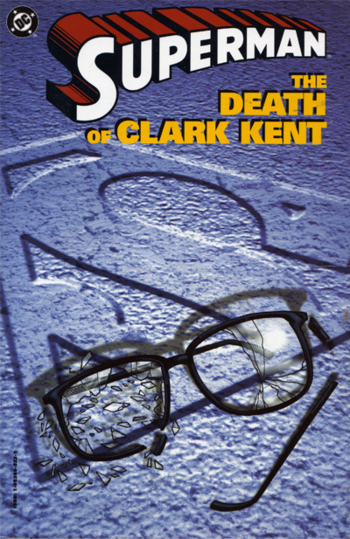 The Death of Clark Kent is a Superman storyline released in 1995. It was part of a series of Milestone Celebrations done at the same time due to these titles hitting issue #100 at the same time; those other titles being Wonder Woman (which saw Diana regain her heroic title), Green Arrow (which saw Conner Hawke become the second Green Arrow just in time for Oliver Queen to perish) The Flash (which introduced the Speed Force) and Justice League America (which was part of a multi-part story with Guy Gardner: Warrior) This story also concluded a storyline that was started during the Zero Month issues of the Superman comics following Zero Hour: Crisis in Time!.
Advertisement:

The villain known as Conduit has harbored a massive grudge towards Clark Kent since they were in high school, but now, learning of Clark's identity as Superman, he takes his revenge scheme further. Attacking those he loves, he pushes Superman to the limits. Can our hero come out on top once more?