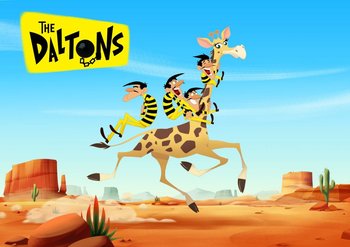 The Daltons (Les Dalton in French) is a French animated series produced by Xilam Animation that aired between 2009 and 2013.

The show focuses on the Daltons of Lucky Luke fame as they repeatedly try (and fail) to escape from prison, all the while surrounded by a colourful cast of characters.

The Daltons provides examples of: