Film / All the Money in the World 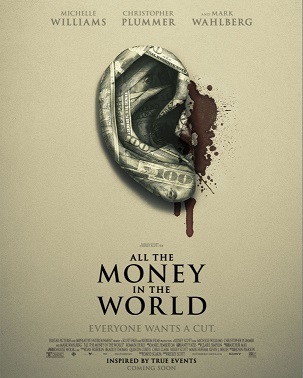 "Everyone wants a cut."
"I have 14 grandchildren, and if I pay a penny of ransom, I'll have 14 kidnapped grandchildren."
— J. Paul Getty
Advertisement:

All the Money in the World is a 2017 thriller directed by Ridley Scott starring Michelle Williams, Mark Wahlberg and Christopher Plummer.

In 1973, 16-year-old John Paul Getty III (Charlie Plummer) is kidnapped by Calabrian gangsters and held for ransom. His grandfather, J. Paul Getty (Christopher Plummer, no relation), is an oil tycoon, the richest man in the world…and an infamous miser. When Getty refuses to pay the ransom, his daughter-in-law, Gail (Williams), has to work with Getty’s head of security, Fletcher Chase (Wahlberg) to find some other way to free Paul.

The movie gained a special notoriety when Kevin Spacey, who had originally been cast to play the octogenarian Getty under a pile of makeup, was accused of sexual misconduct by several men, after the movie was completed and only a few months before its release. With the looming threat of a boycott and a Box Office Bomb, the studio agreed to Scott's proposal to replace Spacey with Plummer and reshoot the 22 scenes he was in in a couple of weeks. This was accomplished one day before the deadline. As a result, the movie came out less than a week after its projected release. For his work, Plummer received a Academy Award nomination for Supporting Actor, believed to be the shortest turnover between an actor filming a role and being nominated for it — it would also be the actor's last nomination prior to his death in 2021.

Tropes associated with All the Money in the World include: