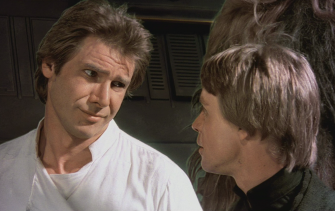 "I used to live here, you know."
"You're gonna die here, you know. Convenient."
"It's my job to say crazy stuff. Your job is to stay cool and stop me."
— Gon Freecss, to his Lancer Killua Zoldyck in Hunter × Hunter
Advertisement:

The Foil for a hero of the closely allied variety.

In general, the Lancer will often form one half of a Red Oni, Blue Oni contrasting duo with the main character. While they may butt heads with The Leader, they're usually the Best Friend by the end of it all.

Traits common to the Lancer include:

Due to most heroes being cheerful and passionate types, Lancers are often surly or analytical, but when the chips are down, Lancers are true as steel and will lay down their lives for the cause. If the rest of the members turn their backs on The Hero for some reason, the Lancer may be the only one who sticks by his side. In the event that The Leader of The Team is unable to lead, The Lancer usually steps up. This plot is used to contrast the leader's leadership style against what The Lancer's would be. A frequent ending for this plot is for The Lancer to gladly give up the reins of power while the Leader often notes that the team will be in excellent hands should he be absent after that.

On the other side of the coin, if the Lancer's dissent gets too out of hand, they're likely to go off on their own to do what they think is right.

Powers and skills common to the Lancer include:

This trope is named for the man-at-arms of The Middle Ages, the term for a professional soldier. While the term also encompasses the members of the knightly class, a man-at-arms was not necessarily a knight. They were also men of lesser financial and social status than knights, but were equally trained and equipped to fight on horseback in full armour and with sword and lance, just like their social superiors. In this regard, he is most recognizable as King Arthur's greatest warrior and right-hand man, Sir Kay, according to the source Welsh legends (and who was later demoted to comic relief).

On that note, if you were looking for a trope on the actual appearances and usage of lances, that's the Jousting Lance trope.

The Chick is usually the mediator between The Hero and the Lancer, making for a Power Trio (as well as a set-up for a Love Triangle). If it's a Love Triangle, the Lancer can either be the Hero's romantic rival or a potential love interest to contrast The Chick.

If given enough individual focus, the Lancer may become the Deuteragonist.

Not to be confused with the recurring character title of the Fate Series, nor Lancer in Deltarune, or the RPG of the same name.