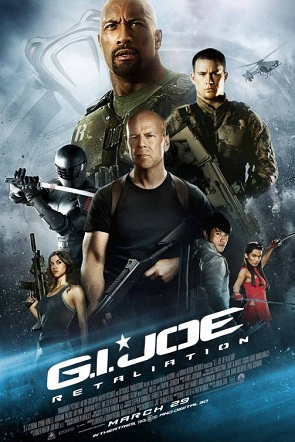 The sequel to G.I. Joe: The Rise of Cobra, the elite team finds themselves framed as terrorists and assaulted by their own people, killing most of their numbers. Cobra has slipped moles into the United States government and are now in control from behind the scenes. With manpower and supplies limited, they have to strike back and undo what has happened.

The film is clearly marketed to be a change of pace from Rise of Cobra, dealing with more close quarters fights and infiltration, less (but not omitting) extravagant technology and submarine battles.

. Was originally slated for release in June 2012 in North America, the film was rescheduled and released on March 29, 2013.

In December 2015, it was announced that Hasbro and Paramount are collaborating on a shared Hasbro movie universe, with G.I. Joe as the springboard (though it's unclear if it will follow from this movie or have a reboot) leading to movies based off M.A.S.K., Visionaries, Micronauts and ROM. In spite of this, the G.I. Joe film series would ultimately get a reboot in 2021 with Snake Eyes: G.I. Joe Origins.

The Cobra Revolution Has Begun

Cobra Commander demonstrates his might and assumes control of the White House in one fell swoop.

The Cobra Revolution Has Begun

Cobra Commander demonstrates his might and assumes control of the White House in one fell swoop.