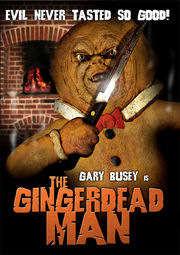 Run, run as fast as you can!
"Save room for dessert cause I'm coming after you."
—Millard
Advertisement:

The Gingerdead Man is a 2005 horror-comedy film made by Full Moon Features and Charles Band, starring Gary Busey as Millard Findlemeyer, a criminal who is sent to the electric chair, comes back to life as a Gingerbread Man, and goes out to kill the woman who sent him to jail.

Followed by two sequels, Gingerdead Man 2: Passion of the Crust and Gingerdead Man 3: Saturday Night Cleaver as well as a crossover with Evil Bong, in which Busey did not participate.