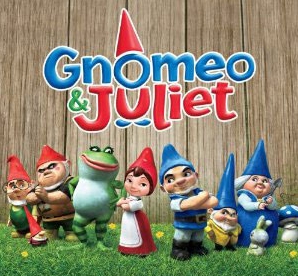 "You know, other people's hate destroyed my love, and I couldn't do nothing about it. But you two, you can."
— Featherstone
Advertisement:

A young man falls in love with a woman named Juliet, but why must he suffer the pressure of his peers, while struggling to be with his true love born of a rival family? Through the impossible, he faces obstacles without fail, with the help of his midget sidekick... and... plastic... flamingo... ornament? Oh. Right. This man's name is Gnomeo. And the characters are living ceramic garden gnomes in a back yard. Get it?

Gnomeo & Juliet takes the most famous love story of all time, places it in the back yards of neighboring English households and scores the whole thing to classic hits by Elton John. Elton and his husband David Furnish executive produced the film through their company Rocket Pictures, critical reaction was tepid but the film was a popular hit, making $194 million off a $36 million budget. In development at Disney for at least a decade, the animation was later farmed out to Starz Animation and ultimately released under the Touchstone Pictures banner in 2011, on Valentine's Day weekend.

A sequel entitled Sherlock Gnomes was released on March 23, 2018 by Paramount and Metro-Goldwyn-Mayer, with Johnny Depp as the title character.