Western Animation / The Secret of Kells 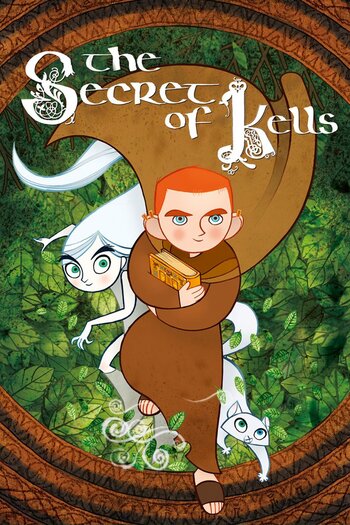 "I have lived through many ages,
Through the eyes of salmon, deer, and wolf.
I have seen the Northmen invading Ireland,
Destroying all in search of gold.
I have seen suffering in the darkness,
Yet I have seen beauty thrive in the most fragile of places.
I have seen the book;
The book that turned darkness into light..."
—Aisling
Advertisement:

The Secret of Kells (original title) or Brendan and the Secret of Kells is an Irish/Belgian/French co-production and an Animated Medieval Fantasy-Adventure directed by Tomm Moore and Nora Twomey at Cartoon Saloon, the studio behind Skunk Fu! and Puffin Rock.

A fictionalized version of the history of the Book of Kells

, the story focuses on Brendan, a young monk wanting to join his fellow monks in working on illuminating texts. But with the rising threat of Viking invasion, his uncle, Abbot Cellach, is far more focused on fortifying the Abbey for the inevitable attack.

The arrival of Brother Aidan, a master illuminator from Iona, allows Brendan to finally have a teacher and gives him an opportunity to leave the Abbey's wall when he is asked to get materials for ink. Brother Aidan has fled the Viking onslaught and is the keeper of the legendary book of Iona — the greatest work of illustration yet produced in Northern Europe, soon to be the Book of Kells. Befriending an enigmatic fairy named Aisling in the forest and taking a part in assisting Aidan with the Chi Rho page, things go well for him until he encounters the evil Celtic god Crom Cruach, and the Viking threat continues to slowly move closer to the Abbey...

Praised for its gorgeous visuals and music (it even got a standing ovation from the staff at Pixar), it managed to surprise everyone and get a Best Animated Feature nomination at the Oscars in 2010. Cartoon Saloon's next feature, 2014's Song of the Sea, was also helmed by Moore and acts as the second part of an "Irish Folklore Trilogy", which was completed with Wolfwalkers in 2020.

The Secret of Kells provides examples of the following tropes: