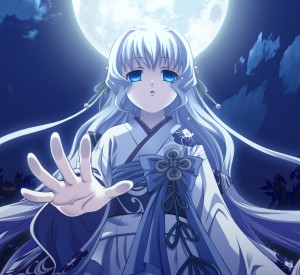 In the Name of the Moon, hold my hand.
Advertisement:

A character archetype that frequently appears in The Hero's Journey, the Mystical Waif is usually a physically young girl (although she may be Really 700 Years Old) with a plot-significant power. While most commonly female, a Mystical Waif can be male, as long as he evokes feeling of protectiveness.

Ofttimes, she's a part of some mysterious, previously unknown society or race that possesses great magic, and she's not uncommonly the last of her kind. The bad guys usually want to exploit her powers to control/destroy the world, while the heroes want to save her out of chivalry or general contrariness.

Typically introduced as a part of the Call to Adventure, the Mystical Waif often appears to the hero seeking for his help while providing him with an exposition to the unknown aspects of their universe. Her introduction is what usually propels the plot from random adventuring to serious world-saving, as she recruits the rest of the party to help her collect the crystals, and she may spend some time as a Damsel in Distress before eventually joining the Heroes' team. If the story includes romance, she may eventually develop to be the Hero's Love Interest, or at least a contender for one.

Personality-wise, the Mystical Waif is usually pure-hearted and kind, although she may seem a little distant at times. She is also extremely naive about the world, and unfamiliar with even the most basic facets of the characters' lives — that is, she has No Social Skills, which can be Played for Laughs in the more light-hearted parts. She might not even speak the same language as the main characters' during her initial introduction to further highlight her cryptic nature. She can be selfless to the point of self-sacrifice at times.

Sure signs you're dealing with a Mystical Waif are odd hair colors; weird (by the standards of the fictional world), often futuristic-themed clothing; magical powers; blank, serious facial expressions; lots of ellipses in her speech; and an inordinate amount of attention from the villains. Frequently overlaps with Mysterious Waif, especially if her past or identity is kept hidden for most of the story.

She is a stereotypical party member in many RPGs. Gameplay-wise, the Mystical Waif is almost always magic-oriented, usually doubling as a White Magician Girl, or if more proactive, as Barrier Warrior or Squishy Wizard. She'll have weak physical stats, but strong magical stats and average-or-better speed. Her quality as a game character is almost entirely tied up in how powerful her attack spells are and whether anyone else has the ability to heal.