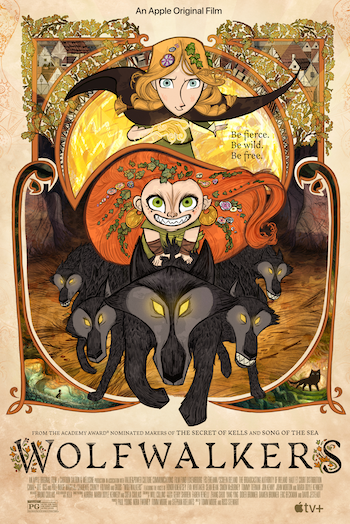 "The hunter's moon is shining,
I'm running with the wolves tonight..."
Fadò, fadònote "Long, long ago", in the Kingdom of Osraighe, there was a tribe with the power to heal.
When Naomh Padraig (Saint Patrick) came to tell the people of the new religion, this tribe stayed apart from the others. They would not give up the old ways.
When the holy man preached, they howled from the forest like wolves to remind the people that there was another, older wisdom in the woods.
Advertisement:
Some say Naomh Padraig cursed them; others that he blessed them. But the result was the same — for ever more, they would walk as people by day and roam as wolves by night.
Leaving their human form behind, any harm or good that befell them as wolves, they felt in in their waking form, too. They were a proud breed, living with the wild wolves, keeping the peace between man and the wilderness.
— The Origin of the Wolfwalkers

Wolfwalkers is an Animated Medieval Fantasy-Adventure and the fourth film from Cartoon Saloon. It was co-directed by Tomm Moore and Ross Stewart and is the third film of the studio's Irish Folklore trilogy, after The Secret of Kells and Song of the Sea. It was released on September 12, 2020 at the Toronto International Film Festival and was later released to Apple TV+ on December 11, 2020.

In the year 1650, Robyn Goodfellowe lives in the Irish town of Kilkenny with her father Bill, a hunter who has come from England to hunt wolves. Unwilling to be confined to the town like her father wants, the free-spirited Robyn runs across a pack of wolves led by a mysterious, wild young girl named Mebh Óg MacTíre. Robyn soon learns that Mebh is a "Wolfwalker," a being whose spirit leaves their body when they sleep and becomes a wolf.

Unfortunately, the forests are under threat by the fanatical Lord Protector, who is determined to tame the land and is willing to slaughter every wolf to do it. Things get complicated as Robyn's relationship with the Wolfwalkers becomes more personal.