Stop Drowning and Stand Up 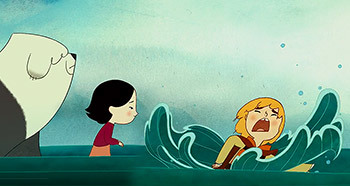 "No river is shallow to a man who cannot swim."
— Paladin, Have Gun – Will Travel
Advertisement:

Bob, who is unable to swim, falls into the water and starts flailing around in panic, calling for someone to help him. Alice arrives on the scene, but simply tells him to, "Stop drowning and stand up." Much to Bob's chagrin, he does so and thus finds out the water was only waist deep at most.

Usually the victim's (imagined) helplessness — giving way to embarrassment — is Played for Laughs.

This scenario happens in real life, but it's not always so comical, as people have actually drowned in shallow water because they were unable to stand up—or simply didn't know they could in time. Two inches can kill you if you can't raise your head. Young children are prone to this, which is why even buckets have drowning labels on them.

Shaggy falls to this trope, of course, in the Tunnel of Love after the Funland Robot attacks their boat.

Shaggy falls to this trope, of course, in the Tunnel of Love after the Funland Robot attacks their boat.