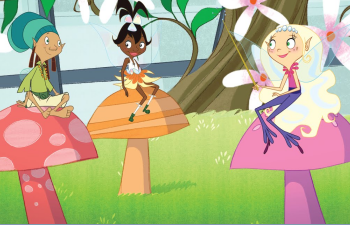 "Pearlie is IN THE PARK!"
Advertisement:

Pearlie is a park fairy with a giant-sized heart and a wardrobe to match. Appointed by Fairy HQ, Pearlie keeps Jubilee Park in sparkling order. She’s a type A personality full of nutty, over the top plans, parties and events for the park and its residents. She has assistance in Jasper, her right hand elf, although he prefers chilling out to real work. There’s also Opal, an outback fairy from Australia sent to learn the ropes of park management from Pearlie.

But all isn’t perfect in Jubilee Park. Pearlie’s cousin Saphira is jealous of Pearlie’s popularity in the fairy world and desperately wants her job. With her incompetent assistant Ludwig, a bat with a heavy German accent, Saphira sets out to spoil perky Pearlie’s day any way she can. Pearlie remains oblivious – always thinking the best of her cousin – while Opal and Jasper are more hip to Saphira’s game. Saphira resides in the park’s greenhouse, running a day-spa for well-heeled fairies, butterflies and the odd goblin fairy inspector.

Based on the children's book series Pearlie the Park Fairy by Wendy Harmer, Pearlie is an Australian-Canadian animated series produced by Australia's Sticky Pictures Ltd. and Canada's Nelvana that ran for one season of 26 episodes from 2009 to 2011 on YTV in Canada and Network Ten in Australia. Reruns later appeared on Qubo in the United States.

Tropes used is this series include: