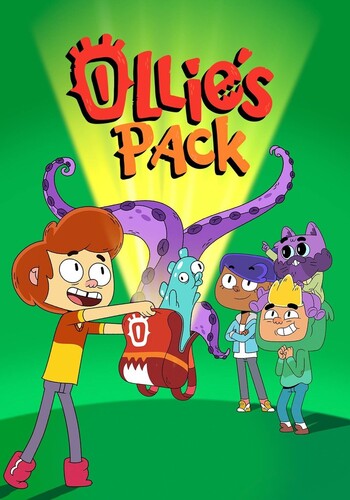 He's the keeper of the pack.
Ollie Allen is his name
Just an ordinary kid
Never thought he'd be The Chosen One
And now he is!
—The first lines of the show's Expository Theme Tune
Advertisement:

Ollie's Pack is a Canadian animated series from Nelvana that was co-created by Brazilian animator Pedro Eboli (creator of Cartoon Network Brazil's Oswaldo and Netflix's Cupcake & Dino: General Services) and Canadian animator Graham Peterson. It premiered in Canada after some delay on September 5, 2020 on YTV (it even aired in multiple other countries earlier, including the United States, which premiered the show on April 6, 2020 on Nickelodeon).

The show is about Ollie Allen, an ordinary 13-year-old boy from the town of Portshill who is almost never seen without his red-and-orange backpack on his shoulders. However, Ollie's pack is no ordinary schoolbag, but rather a powerful artifact that contains inside of it the Monsterverse, an alternate dimension populated by monsters, aliens, and other strange creatures. This magical backpack, known as the Monster Pack, was entrusted to Ollie by Captain Wowski, a small, purple, cat-like Monsterverse denizen who has given Ollie the title of The Chosen One and trains him in using the Pack's power. With the help of his two best friends, Cleo Badette and Bernie Alves, Ollie must protect the Monster Pack from falling into the wrong hands and send escaped Monsterverse inhabitants back into the Pack before they can cause trouble on Earth, while also using the Monster Pack's power in his everyday life to deal with typical middle-schooler problems.

that was pitched to Nickelodeon as one of numerous pilots made for the Nickelodeon Animated Shorts Program. Nickelodeon declined to pick the pilot up for a full series, but the creators continued to shop their idea until it eventually came to the attention of Nelvana, who greenlit the project and now own the rights to the work.

The final episodes of the show's first season aired in early May 2021 on Nicktoons. Pedro Eboli would later state on his Twitter

that he had not been contacted about the possibility of creating any new seasons of Ollie's Pack. And while he said that was ultimately very happy with what he had made, he has confirmed that he since moved onto other projects, leaving the show a one-season wonder.

The theme song to Ollie's Pack explains the premise of the series - an ordinary kid is given the duty of protecting a magic backpack that functions as a portal to another dimension.

The theme song to Ollie's Pack explains the premise of the series - an ordinary kid is given the duty of protecting a magic backpack that functions as a portal to another dimension.