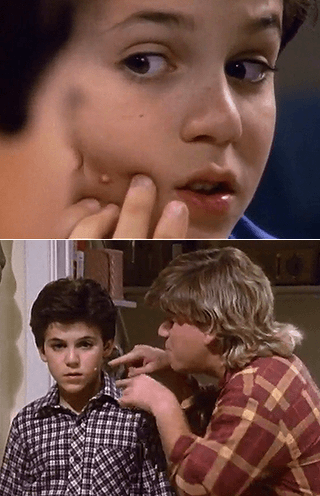 Jessie: Kelly, it’s just a pimple. It’s not the end of the world.
Kelly: That’s easy for you to say—you don’t have a light bulb attached to the end of your nose.
Lisa: Kelly, there’s barely anything there. It looks like a freckle.
Kelly: It may look like a freckle now, but by the end of the day it’ll look like Rudolph the Red-Nosed Reindeer.
— Saved by the Bell
Advertisement:

In Real Life, acne is a fairly common thing that people go through, usually when they reach a certain age. It's not uncommon to see pizzafaces left and right in the real world, and no one really makes a big deal out of acne unless it's really noticeable on someone. It's also not as time-limited as most people make it out to be; while your first brush with it does tend to occur in your teenage years, some people are just unlucky and can continue to get occasional bouts as adults.

The world of fiction, however, didn't seem to get the memo. In fiction, especially shows and movies aimed at kids and teens, any character who develops acne (usually a girl, but there are male examples too) will treat it like it's the end of the world, even if it's just one pimple.

Usually this is used as a plot device when a female character is preparing for a date, school dance or something similar. She is bubbly and excited that she'll finally be going out with the boy of her dreams and knows in her heart that it will be the best day of her life. But then, the night before her plans, she notices in the mirror that she has a huge zit that in many cases resembles a flashing LED light (except for the "flashing" part, of course, unless Rule of Funny is in play), usually right in the middle of her forehead. She will then spend the remainder of her time fretting over the fact that she doesn't have perfect skin and will usually take drastic measures to hide or remove the pimple. Her attempts usually fail and the acne is eventually revealed to her peers, who treat it like some kind of hilarious mutation the likes of which they've never seen.

Often, though, her date will tell her that it doesn't matter to him if she has perfect skin or not, saying she's beautiful just the way she is. If a female character with bad acne succeeds in having it removed, it usually reveals that she was beautiful all along.

With male characters, however, this is usually played completely for laughs and there is no sympathy shown to them by any of the other characters at all. There's also an urban legend that having sex will cure acne, so the implication that a guy with bad skin...

Strangely, most shows that use this trope depict the character as only having one pimple, with the rest of their face being completely clear. If a show is known for anything supernatural (like Wizards of Waverly Place) or the protagonist has a vivid imagination (like The Amanda Show), expect the zit to become a speaking sentient creature, and as such, it overlaps with a Garrulous Growth.

This seems to be becoming a Discredited Trope these days, as it rarely turns up outside of parody.

What Happened To My Head?!

Rolf uses a blemish remedy from the Old Country called Carbuncle of the Flesh stew to cure Eddy's pimple problem. The treatment works, but also has an unexpected side-effect.

What Happened To My Head?!

Rolf uses a blemish remedy from the Old Country called Carbuncle of the Flesh stew to cure Eddy's pimple problem. The treatment works, but also has an unexpected side-effect.