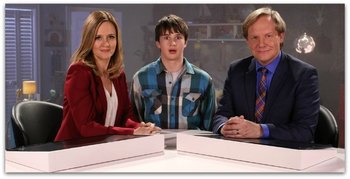 Game On is a Canadian teen sitcom, which premiered on YTV in May 2015.

Based on the Norwegian series Kampen, the show stars Grayson Gurnsey as Toby Martin, a 14-year-old boy whose successes and failures in life are narrated in the style of a sports play-by-play by an anchor team played by Jonathan Torrens and Samantha Bee.

The show is not to be confused with the 1995 British Sitcom.

"And it looks likes these are the tropes Toby is going to be trying to use in his series":