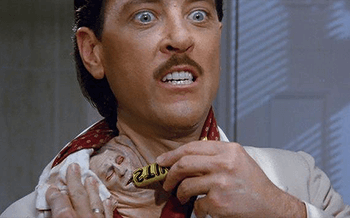 How to Get a Head in Advertising.
Advertisement:

Our poor characters get a sentient undesirable growth on their body. Growths like warts, zits, pimples or even tumours. They're alive, able to see or feel through their senses... and they talk.

Most people have at least some experience with unwanted, annoying skin problems like pimples or warts. They're usually not very serious medical problems but it can be very hard to get rid of them effectively and permanently. They're ugly, annoying and sometimes embarrassing (think a huge pimple on a beauty queen's pretty face that usually has no blemishes). What's even more embarrassing and annoying than a pimple? Talking pimple! Zits kind of look like disturbing little heads growing off of one's body, so they might be imagined like actual human-like heads. The Garrulous Growth often has a full human head with a face but it can be just a mouth with lips. Talking tumor might be shaped like another almost full body. These growths often resemble small fetuses.

The Garrulous Growth interacts with the character who has the boil or pimple on their body and it (or he or she) wants to desperately talk to other people, too. The growth is usually annoying and loud. It keeps embarrassing "its human" in front of other people, sharing their secrets and things that should be kept private. The protrusion usually wants to take control over the person's body, or in extreme cases, it wants to take over the whole world. Some of them like to sing, and very loudly at that because they feel the need to express themselves.

The characters who grows the protrusion usually freak out and are disgusted with it and with their body itself... because warts and zits and boils are gross, and sentient ones cross straight into the Body Horror territory. The sheer horror comes from the fact that your own body can produce something this disgusting. However, the sheer absurdity of this trope means it's more often than not Played for Laughs.

Naturally the characters try to get rid of these as soon as possible. If the boil finds out it's gonna be lanced, it will protest and call it murder. Sometimes however the character and the growth develop friendship or companionship.

We are the Stinkin' Blackheads

In the Oh Yeah! Cartoons short "Fuzzy Bunny Presents: A Kid's Life", Suzy Cornhusk is tormented by sentient blackheads on her nose singing about how much they enjoy being unsightly blemishes who bring endless misery and humiliation to children.

We are the Stinkin' Blackheads

In the Oh Yeah! Cartoons short "Fuzzy Bunny Presents: A Kid's Life", Suzy Cornhusk is tormented by sentient blackheads on her nose singing about how much they enjoy being unsightly blemishes who bring endless misery and humiliation to children.