Music / The Who Sell Out 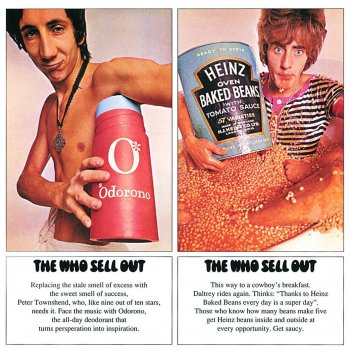 The Who Sell Out is the third studio album by The Who, released in 1967. A Concept Album, it is formatted as a collection of unrelated songs with fake commercials and public service announcements in between them. Part of the intended irony of the title was that The Who were making real commercials around this time.

Lawsuits followed the album's release due to the mention of real-world commercial interests in the faux commercials and on the album covers, and by the makers of the actual Radio London jingles, who claimed the Who used them without permission.

The album is best remembered for "Mary Anne with the Shaky Hand" and "I Can See for Miles", the latter which indirectly inspired The Beatles song "Helter Skelter" on The White Album. Paul McCartney had read that The Who had written the "heaviest rock song ever" and, without having heard the actual song, felt that they should top that. And they pretty much did.

Her deodorant had let her down—she should have used Troperono: