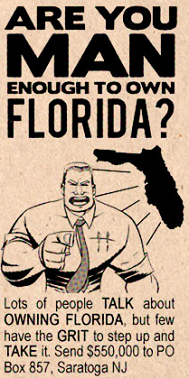 This comedy trope is a kissing cousin of both the Show Within a Show and the Commercial Switcheroo. Typically placed immediately at the end of a segment, it seems like the show you're watching has just cut to the mid-show commercial break. However, it quickly becomes evident (ideally in about the time it takes most folks to start getting out of their La-Z-Boy) that the commercial is actually a fake-out, for an absurd or grotesque product. It may also figure into the plot, especially in shows about people in Show Business who would do anything for a break.

Compare/contrast with Show Within a Show, Commercial Switcheroo and Trailer Spoof. Real Trailer, Fake Movie is a subtrope.

For more parodic content, see what The Other Wiki has to say about parody commercials

Big Bill Hell's is a 1-minute parodic commercial made for an underground contest in Maryland which pokes fun at used car dealer advertisements.

Big Bill Hell's is a 1-minute parodic commercial made for an underground contest in Maryland which pokes fun at used car dealer advertisements.