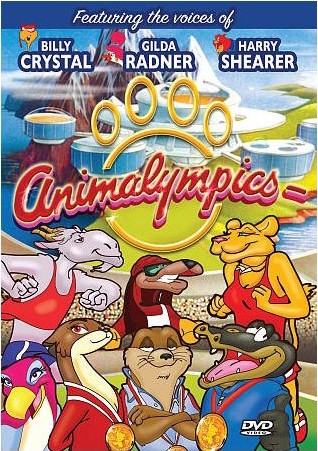 "In all creatures great and small, there resides a spirit of athletic competition..."
Advertisement:

Animalympics is an animated film produced by Steven Lisberger (who would later create TRON for Disney). The film was originally conceived as a pair of specials for NBC to air during the 1980 Olympic Games (one for the Summer Games and one for the Winter Games), but the American boycott of the Summer games that year put the kibosh on those plans. Lisberger's studio instead released Animalympics in theaters as a single feature film.

The film consists of a series of vignettes representing news coverage of the "Animalympics", which as you can imagine are the Olympics for anthropomorphic animals. The main event is the marathon, in which the two favorites (the obsessively driven goat René Fromage, and You Go, Girl! lioness Kit Mambo) take an early lead... and also take to each other. Other highlights include the rags-to-riches tale of track-and-field alligator Bolt Jenkins, a fencing match that turns into a pastiche of Errol Flynn movies, and a hockey game that almost literally turns into all-out war.

The voice cast consists of Gilda Radner, Billy Crystal, Harry Shearer, and the film's writer/co-director Michael Fremer in his only noteworthy acting role ever, who are the only four voice actors in the film, each portraying a wide array of characters.