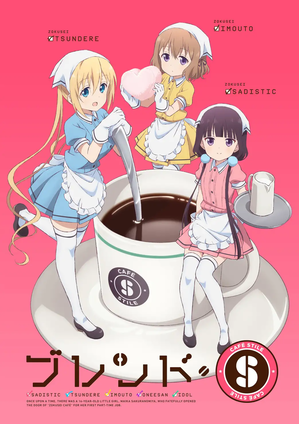 Would you like your coffee with or without Moe?
Advertisement:

Maika Sakuranomiya is your typical, enthusiastic high school girl with a supportive sister, who comes from a traditional Japanese family and dreams of being able to study abroad. In order to make that dream come true she first needs to earn money, but she has one little problem. She happens to have a naturally sadistic exterior which keeps ruining potential job placements, and it seems as though no place would want to hire her. This is especially vexing to Maika, as in reality she's the exact opposite—she's almost too kind and gentle.

However, Maika's luck changes when she happens upon a blond-haired foreigner at the train station. This man is the Italian manager of Café Stile, a unique café where the waitresses are all assigned specific character archetypes, taken from anime otaku culture. Maika's menacing expression instantly catches his attention, and she is offered a once-in-a-lifetime job opportunity — as a sadist waitress whose job is to abuse the customers.

Although Maika is baffled when she's told that the people she'll serve actually want such treatment, she's pleased to have found a place where her menacing looks will actually be an asset, and so takes the job after a (mostly) successful run with some customers. Now she begins trying to balance her double life as the kind-hearted Maika Sakuranomiya, and the cruel sadistic waitress of Café Stile, while dealing with the hijinks of her co-workers in this comedic Slice of Life that's full of smiles, sweetness, sisters, sadism, surprises, and service.

Blend-S is a yonkoma manga created by Miyuki Nakayama and serialized in Manga Time Kirara Carat since 2013. It received a 12-Episode Anime by A-1 Pictures adaptation starting 8 October, 2017. Crunchyroll has the streaming rights for North America and can be watched here

, while Aniplex USA has the home video rights.