Visual Novel / Blessing of the Campanella 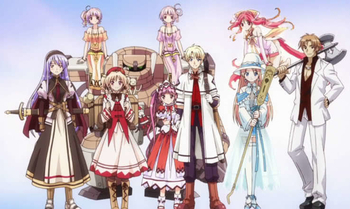 In the Nostrum Region, the city of Ert'Aria, is the adventurer's clan, Oasis. Leicester Maycraft is a member of this clan. A meteor shower, that only happens once every seven years, is about to take place, and the city prepares for the harvest festival. Joined by "The Jewel of Ert'Aria", Carina Verritti, traveling street performer Agnes Boulange and member of the Knights Templar, Chelsea Arcot, he sets out to see the meteor shower.

Something very strange happens that night. A meteor, made out of Ale, the world's magical phlebotinum, shoots toward the city and takes the form of a girl called Minette, who calls Leicester her Papa.

Originally a Visual Novel by Windmill, Shukufuku no Campanella was adapted into an anime in the summer of 2010 by AIC, then licensed by Funimation for DVD release in 2011. A fandisk Shukusai no Campanella was released in late 2010.

Has nothing to do with character actor Joseph Campanella, sadly.

Tropes in Shukufuku no Campanella include: