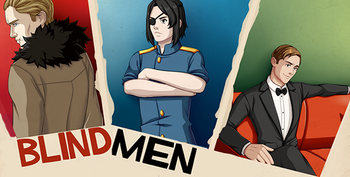 Pictured from left to right: Sergei, Keegan, and Hunter
Advertisement:

Blind Men is a Romance Game Visual Novel developed and published by Man-Eater Games. It was released on July 25, 2017.

The player controls Keegan (aka Doctor Cyclops), an aspiring young super villain seeking admittance into the League of Evil. The final step of his application requires him to commit a notable crime. However, two men complicate matters: GLOBAL agent Hunter and KGB agent Sergei. What follows is either an unlikely alliance or an unfortunate mistake...