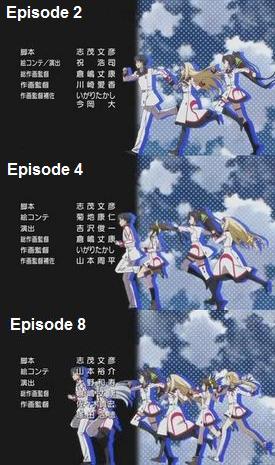 When you run in front of them, it's hard to see all of the girls chasing you!

As the name suggests, this is when the Title Sequence or closing credits of a series are slowly altered over the course of its run, by updating or replacing scenes to reflect major changes that have happened over previous episodes. This is a popular way of avoiding a Spoiler Opening for more plot-driven shows, usually mysteries, by having major characters who haven't been introduced or background characters with hidden importance initially being silhouettes or not appearing at all.

In the case of anime or other shows being aired outside their home country, these changed credits may or may not carry over into foreign broadcasts, with overseas airings using only the first version of the credits or different ones entirely instead.

Compare Evolving Music and Evolving Title Screen. Not to be confused with Title Sequence Replacement, where the title sequence for even previous episodes is changed for syndication and rerun purposes. If this happens every single episode, it may be a Couch Gag.