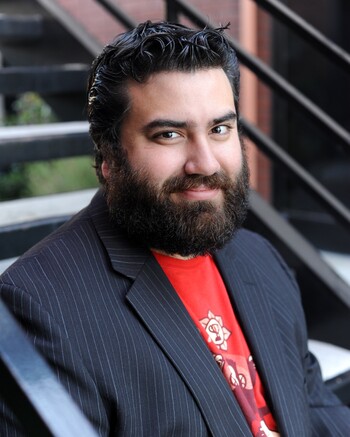 My name is Jirard "Dragonrider" Khalil, and I am... The Completionist.
"YES!"
Advertisement:

The Completionist is part of the That One Video Gamer community.

Jirard "Dragonrider" Khalil is The Completionist

, an internet reviewer who is partnered with Polaris. His show is the flagship show for his own community, That One Video Gamer. Every week, he completes a game 100% and then reviews it, detailing the quality of the game overall, and whether or not the payoff is worth the hours spent on completing it. Refreshingly, Jirard uses very little (if any) profanity* Except in the first few episodes, which use quite a lot of offensive content. Thankfully, a "remastered" version of the first episode (which was the worst offender) has been released, replacing some of the more tasteless/dated humor and censoring the remaining swearing-though his Doom review provided an uncensored F-bomb for the first in a while. in his reviews, making them reasonably family friendly, as well as informative and entertaining. As the series continues, the reviews become much more plot-focused, with Wham Episodes and Cliffhangers galore.

His reviews were divided into the following segments until October 2016: Story* An introduction to the game's plot and characters, Presentation* A look at the game's graphics and music, Gameplay* A look at the game's gameplay and controls, Final Level* Detailing the final level and boss in a spoiler-heavy but skippable section, The Struggle* A look at how hard the process of completing the game is, added in Season 2 and the Completion Bonus* A look at the bonus received for achieving 100% Completion, anything from a secret weapon, to a new game mode, before Jirard gives his final "Completionist Rating"* On a rating scale as follows:"Complete It", "Finish It", "Play It", "Look At It", and "Donate It" (previously known as "Burn It" until Season 4).

However, the show went under a massive retool after the Tales of Symphonia review in the October of 2016, getting an new interface as well as the new segments: The Legend* Information about the game and why he's playing it, and also what the game's reputation is in gamer culture: this also includes his gameplan for how to complete it based on what (occasionally little) he knows about it, The Quest* His experience with the game and his initial impressions of it, The Battle* Usually detailing his journey towards completion and focusing on several challenges in particular on his quest to complete the game, and The Reward* The details of completion bonuses, and also his review of the game itself: whether it's worth playing and whether it's worth completing; with only the rating system left from the original system-with each of the new segments merging and mixing previous aspects.

Since then, the brand name "That One Video Gamer", while originally only used for those two shows, has become a collection of web series, including "Super Bunny Hop", "Satchbag's Goods", "The Dex", "The TOVG Podcast" and even a Completionist-themed comic. The official site, which serves as a hub of sorts for all TOVG series can be found here

For the majority of four seasons, the videos heavily featured Jirard's producer and comedic partner, Greg Wilmont (The Mediocre-ist) providing much of the comic relief, and later with Alex Faciane of "The Dex". In early 2015, Greg left the show after a falling out between him and Jirard (alluded to be because of the difficulties in maintaining a friendship while running a business, though neither have said much in regards to the details).

In August 2017, Jirard eventually confirmed his falling out with Greg and that sometime after they parted, Greg had requested, and then demanded, that he pull down all the videos featuring the two (that's 120 videos from The Completionist alone and more if you include other videos by TOVG as a whole). In a vlog, Jirard noted that it was a difficult decision and he considered fighting it, but ultimately decided to comply. He then announced that he would recomplete all 120 of those games in a new bi-weekly series called "The Completionist: New Game Plus".

Jirard encouraged his viewers to upload the old episodes and disseminate them before he pulled them, and they can all be viewed here

, for free and without ads.

In 2021, G4TV was relaunched, and Jirard became one of the first hosts recruited for the new service. He is a constant on both X-Play and Attack of the Show!. Due to his responsibilities for G4, he had to scale back The Completionist to six videos a month (two Wednesdays, four Saturdays), and only appear on Super Beard Bros on the "'Eff it" videos.

Jirard is also a part of the bands Big Bad Bosses (alongside Alex Faciane, Satchell Drakes, and a rotating fourth member each album) and Complete Chaos, a metal cover band.

He frequently streams on Twitch late at night here

"So, with that in mind, guys, I give this page my completionist rating of... "Complete It"!"