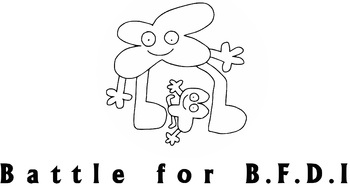 Battle for BFDI—BFB for short—is the Denser and Wackier Soft Reboot and fourth season of Battle for Dream Island, an animated web series of what you called an object show by the Huang Twins, Michael and Cary, aka jacknjellify or htwins. It ran from November 3, 2017, to April 9, 2021. Sixty-four anthropomorphic objects go about their daily lives. After a black hole sucks up the world to open a jar of cyanide for his fellow contestant, Four and X (characters from a previous animation called "X Finds Out His Value") appear and propose a game in which the prize is a "BFDI".

But what is a BFDI? Is it replacing Dream Island as the most important big deal in BFDI history? Well, it doesn't matter because all the contestants are very excited to win it. Thus the contest begins.

On March 25, 2020, the series was split into two shows with the release of its 16th episode, "The Escape From Four". The episode acted as a double Backdoor Pilot for both a new show named The Power of Two (abbreviated "TPOT"), which has a new host, Two, and took most of the contestants, and Battle for BFB, a direct continuation still featuring Four as the host, which takes the remainder. While the voting system for BFB was largely the same as previous seasons, it changed from "vote to eliminate" to "vote to save" after the split.

When Taco was confirmed to be the impostor, Book freaks out and the team shows to really not take her seriously anymore.

When Taco was confirmed to be the impostor, Book freaks out and the team shows to really not take her seriously anymore.