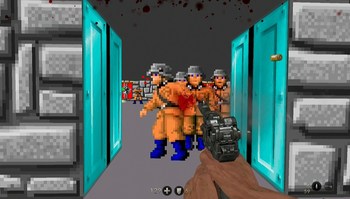 When a series does an Art Shift to an older presentation style for Flashback Effects to a time when it used this style. It may be in a work which has Art Evolution, calling back to its own specific past, or it may be an Affectionate Parody of more general styles.

When you have characters in a flashback appear the way they look in the story's present time, making their latest appearance a Retcon to the period of the flashback, it's Backported Development. If a scene from a previous installment is redone using a newer art style, it's a version of Flashback with the Other Darrin.