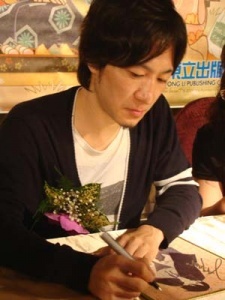 A Mangaka specialising in often surreal Shōnen Gag Series. Most known for Sayonara, Zetsubou-Sensei, his first work to receive an Animated Adaptation. After the success of said series, some of his other works; Katteni Kaizo and Joshiraku were also adapted. Also notable for his Art Evolution. Eternal enemy of Ken Akamatsu. Kenjiro Hata of Hayate the Combat Butler fame was formerly his assistant editor until early 2000s.

If his Author Avatar is to be believed, he is poor, lonely and constantly under stress. Also far less successful than in real life.

His works include, in chronological order:

Tropes in his work