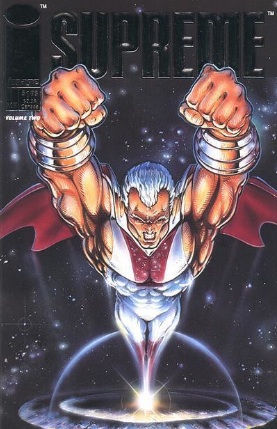 Stop! In the name of lov— Oops! Wrong Supreme.
Advertisement:

Supreme is a comic book superhero created by Rob Liefeld who has gone through two distinct phases of existence.

Originally, Supreme was a Grim '90s Anti-Hero who had a very similar power set and appearance to classic Superman, but none of his morality or humility. Supreme was violent, brutal, aloof, with a massive ego, made no attempt to connect with humanity or live as a human, and was convinced that he was a god. Within the Image Comics Shared Universe he was one of the first superheroes to emerge publicly, originally becoming active during World War II where he fought against Nazi Germany and Imperial Japan – soon after the war ended he left Earth to go explore the universe. Fifty years later, after making a name for himself throughout the universe as a mighty warrior, he returned to Earth to find it now overrun by superheroes of all kinds. While he still battled supervillains and took down criminals, he considered himself unquestionably above humanity, and the general public feared and distrusted him.

In 1997, Alan Moore took over the series, with permission to retcon anything he didn't like. Moore threw out most of Supreme's history and recreated him as an explicit Superman homage, complete with his own scientific archnemesis with a name ending in X, a younger and more innocent Distaff Counterpart, a superteam similar to the Justice League of America, and so on. Moore's run on the series was heavy on the meta-text: his first issue is about the fact that the entire series is being retconned, with Supreme watching in amazement as some cosmic force recreates the world around him, and meeting a parade of earlier Supremes who were cast out of continuity by earlier retcons (most of which Moore had just made up for the occasion). As he explores his new history over the following issues, it's filled in via means of a series of flashbacks that are each written and illustrated in a contemporary comics style (for example, a flashback set during the 1960s resembles a Silver Age story). The fact that Moore's Supreme is now a noble figure (much like Superman) instead of his former dark self is linked to the fact that, in the new continuity, Supreme spent the eighties and nineties pursuing a quest in outer space and thus missed the Age of Dark Superheroes entirely. Another layer of meta-commentary is brought in by Supreme's new civilian identity: he and his newly-acquired equivalents of Lois Lane, Perry White, and Jimmy Olsen work at a comic book company. Their conversations frequently reflect contemporary trends in the comic book industry, and even (sometimes without their entirely realising) things happening around them in their own story.

A new run of Supreme by The Savage Dragon creator Erik Larsen came out in 2012. It began with an adaptation of Alan Moore's final script, and from there went on to present a balance between the original anti-hero vision of the character and Moore's revisioning, with the plot focusing on the escape of Liefeld's Supreme from Supremacy into the revisioned world. The series was cancelled after four issues due to low sales.

In 2014, Image started publishing the Supreme: Blue Rose miniseries, written by Warren Ellis. A new revision takes place, but the system is broken. In the new world, investigative journalist Diana Dane is hired by Darius Dax, who specializes in strategy forecasting related to rare and unusual cases for wealthy and influential people, to investigate the mystery behind a golden object that fell from the sky and a man named Ethan Crane.