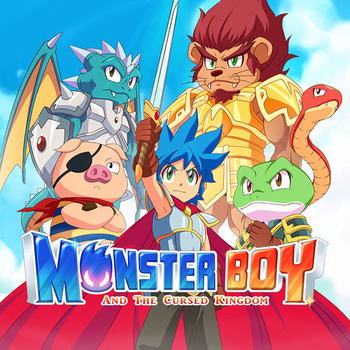 Jin, surrounded by his monster transformations.

After more than twenty years of silence (if not for the worldwide release of the English version of Monster World IV in 2012) , the Wonder Boy series was suddenly Un-Canceled in early 2015, when the trailer for a new installment was released. Instead of being titled Monster World (like all Metroidvanias in the series were called in Japan) or Wonder Boy (like they were still called everywhere else) , both titles were combined to form Monster Boy.

What finally became Monster Boy and the Cursed Kingdom was originally merely a Spiritual Successor to Wonder Boy III: The Dragon's Trap created by the French developer Game Atelier called Flying Hamster II: Knight of the Golden Seed. After an unsuccessful Kickstarter campaign, the project nevertheless could find a publisher (FDG Entertainment) and, better yet, was noticed by one of the founders of Westone Bit Entertainment and the creator of the Wonder Boy franchise, Ryuichi Nishizawa, who went on to collaborate on the game, and gave the studio the green light to turn the Spiritual Successor into a full-fledged sequel, with a story integrated in the overall Monster World continuity.

The game has a new protagonist, Jin, who one day discovers his uncle Nabu drunk as a skunk, flying on a barrel, wielding a magic wand, transforming people into monsters and otherwise wreaking havoc.

Originally slated for a 2017 release, the game was finally released on 4 December, 2018, available for direct download and limited physical distribution on the the PC, Xbox One, PlayStation 4 and Nintendo Switch platforms.

, complete with a trailer, a developer blog and pre-order information. The original Kickstarter campaign can be found here

Alternative Title(s): Monster Boy And The Wizard Of Booze