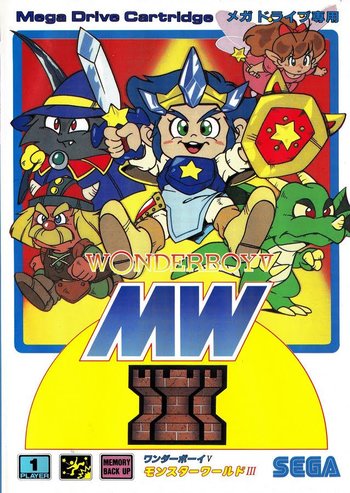 Japanese cover art, depicting Shion with his little companions Priscilla, Dragon, Hotta, & Shabo joined on his journey.
Wonder Boy in Monster World (released in Japan as Wonder Boy V: Monster World III) is the fifth Wonder Boy game. A new protagonist called Shion embarks on a heroic adventure to save his land from a monster invasion. It was originally released for the Sega Genesis in 1991, followed by an 8-bit version for the Sega Master System in 1993 released exclusively in Europe.
Advertisement: